What is the principle of explosive detection in the airport?

What is the principle of explosive detection in the airport?

At present, explosives widely used in the world are organic compounds, which can be divided into six categories according to their chemical properties and structures:

6) Acid salts, such as ammonium nitrate, etc. Among them, the first three categories (see table) are widely used in military and national defense industries because of their excellent chemical stability and properties.

Energy X-ray Diffraction Spectroscopy (EDXRD) is a non-contact detection method that can accurately distinguish explosives from a variety of materials by comparing the standard characteristic peaks of explosives.

Ion mobility spectroscopy is the most commonly used detection technique in explosives detection, because it can detect explosives qualitatively and quantitatively, and has a low detection limit.

Raman spectroscopy technology mainly collects and analyzes information on the vibration and rotation of scattered photons to obtain a spectrum with fingerprint imprint characteristics. 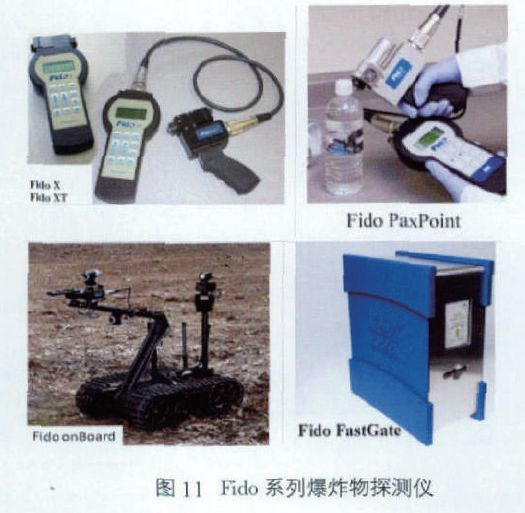 Next, I summarize several simultaneous interpreting techniques based on different sensing materials from the perspective of current hot research.

The fluorescent chromophore in the molecule of fluorescent conjugated polymer is conjugated in the form of π - π * to form a large conjugated π electron system. In the absence of explosive molecules, excited excitons or carriers can migrate along the conjugated system. The migration distance is mainly determined by the exciton lifetime and the exciton migration rate on the conjugate chain. However, when the exciton encounters the quencher molecule or electron acceptor (such as TNT, DNT, etc.) in the migration process, the electrons in the excited state undergo electron transfer, and the electrons are transferred from the polymer to the LUMO level of the quencher or electron acceptor. At the same time, the opposite charge generated in this process is transferred to the polymer chain. As a result, the migration of the exciton along the conjugate system is blocked, The excited molecules are finally effectively activated, resulting in the effective quenching of polymer fluorescence. Because the delocalized electrons in conjugated polymers have stronger electron donor ability, the excited electrons are easier to be quenched by receptor molecules, which increases the sensitivity of the whole detection. Different from the 1-to-1 contact of traditional fluorescent small molecules, conjugated polymers have the characteristics of greatly amplifying the response signal, which is called "one point contact, multi-point response", that is, "fluorescence quenching self amplification effect". Its detection sensitivity is very high, which can reach nanomolar level or even picomolar level.

MOF has permanent porosity and electronic adjustability. Coupled with the reasonable design and engineering design of its crystal and pore structure, people can fine tune the chemical environment inside and on the surface of the frame. With careful design, MOF can promote the penetration and identification of target analytes, so as to achieve excellent sensitivity and selectivity. At present, the Li Jing research group of Rutgers University in the United States carried out this work earlier. They designed a [Zn2 (bpdc) 2 - (bpee)] for the detection of trace explosives in the gas phase. The detection principle is similar to that of fluorescent conjugated polymers. Based on the redox quenching mechanism, this material can achieve rapid response and high sensitivity in the detection of DNT, and can detect DMNB. As shown below The synthesis of organic conjugated polymer materials is time-consuming and high cost. At the same time, there are inevitable problems such as photobleaching and chemical degradation of organic fluorescent materials. Therefore, the development of new fluorescent materials with high photobleaching resistance and degradation resistance has become a research hotspot of fluorescence detection technology of nitroaromatic explosives. As a new fluorescent nano probe, quantum dots (QDs) have high quantum yield and long-time luminescence stability, and have a strong resistance to photobleaching. The fluorescence intensity and stability of quantum dots are 20 times and 100 times higher than those of organic fluorescent materials, respectively. In addition, quantum dots also have excellent fluorescence characteristics such as wide excitation spectrum, narrow emission spectrum and accurately regulated emission wavelength. They show obvious advantages in the micro trace detection of nitroaromatic explosives, especially the rapid screening of explosives.

What is the principle of explosive detection in the airport?-Safeagle